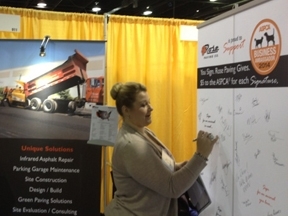 The trade-show season is in full swing and that means another year of networking, relationship building, and…fundraising!  Like last year, we are supporting the efforts of a worthwhile charity during our annual, multi-event fundraising campaign.  However, new this year, we selected the charity based on feedback from our loyal Facebook fans.  In October, you voted on our Facebook page to elect Animal Welfare as the cause to support.  As a result, the charity benefiting from our “You Sign…We Give” campaign in 2014 is the ASPCA® (The American Society for the Prevention of Cruelty to Animals®).

Fundraising for the ASPCA kicked off at the CAI-Illinois Conference and Tradeshow on Saturday, February 1st, in Rosemont, Illinois, and will continue throughout the year at events in California, Georgia, Florida, and Texas. Next up is the RFMA Annual Conference in Dallas on February 16-18.  Attendees are encouraged to visit Rose Paving’s booth #1015 during exhibit hours and autograph a banner in support of the ASPCA.  At the end of the year, results will be tallied from all events and Rose Paving will donate $5 to the ASPCA for each signature obtained.

“We are excited to serve as an ASPCA Business Ambassador and help raise awareness and funds to support its mission, which is to provide effective means for the prevention of cruelty to animals throughout the United States,” said Chris Tanner, Rose Paving senior vice president and partner. “After a very successful fundraising campaign in 2013 for St. Jude®, we are thrilled to continue our efforts in 2014 for another worthy cause.”

Founded in 1866, the ASPCA® (The American Society for the Prevention of Cruelty to Animals®) is the first animal welfare organization in North America and serves as the nation’s leading voice for animals. More than two million supporters strong, the ASPCA’s mission is to provide effective means for the prevention of cruelty to animals throughout the United States. As a 501(c)(3) not-for-profit corporation, the ASPCA is a national leader in the areas of anti-cruelty, community outreach and animal health services.