What is Roller Compacted Concrete (RCC) and What Are Its Uses?

This article provides a thorough introduction to Roller-compacted concrete (RCC) and its many paving applications. If you’d prefer to skip this guide and get your information straight from the experts, then contact the team at Rose Paving and speak directly to one of our paving specialists. 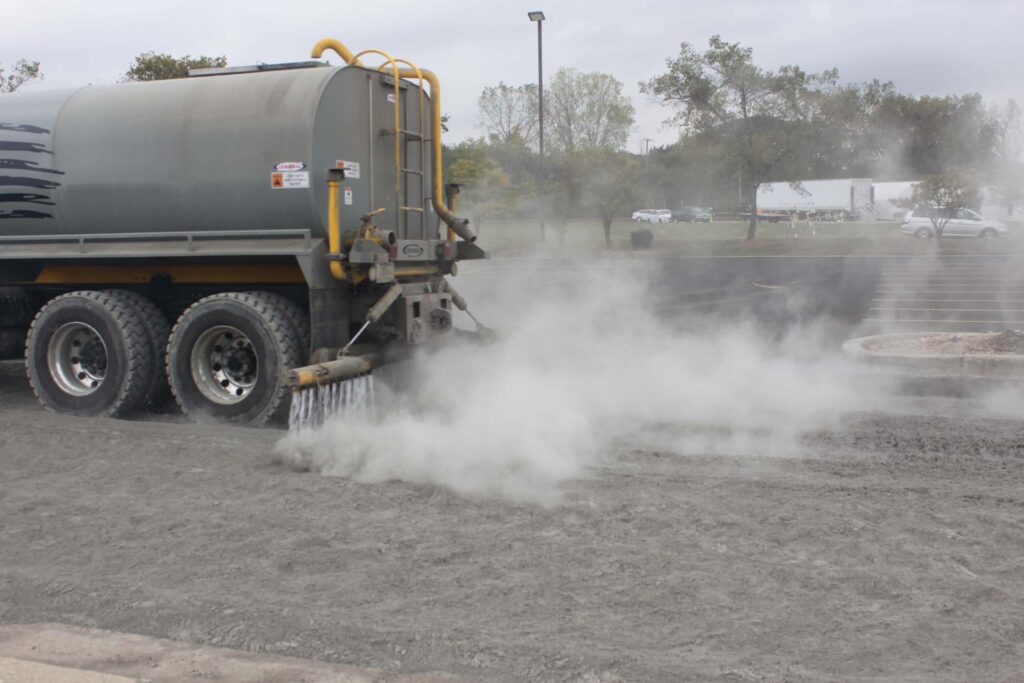 What is Roller Compacted Concrete?

Roller-compacted concrete or RCC is exactly what it sounds like, i.e., concrete that has been compacted by a rolling machine. It’s placed with conventional or high-density asphalt paving equipment, then compacted with rollers.

Roller-compacted concrete is much the same as conventional concrete — it contains the same ingredients cement, water, and aggregates — but consists of a drier mix that makes it stiff enough to be compacted by vibratory rollers.

In most cases, RCC is constructed without joints, and needs neither forms, finishing, dowels or steel reinforcing. In short, structures made with RCC are easier to make, faster to build and more economical than those made with basic concrete.

Roller-compacted concrete (RCC) typically consists of cement, coarse and fine aggregates, and water. It requires no forms, finishing, steel reinforcement or joint sawing, and can be used for any type of industrial or heavy-duty pavement.

Coupled with long service life and minimal maintenance, RCC’s low initial cost adds up to economy and value. The high strength of RCC pavements also eliminates many of the costly problems traditionally associated with asphalt pavements.

The Process: How Roller Compacted Concrete is Prepared in 5 Steps

The RCC process begins at the mixing plant and calls for a stiff, zero-slump mix with the consistency of damp gravel. 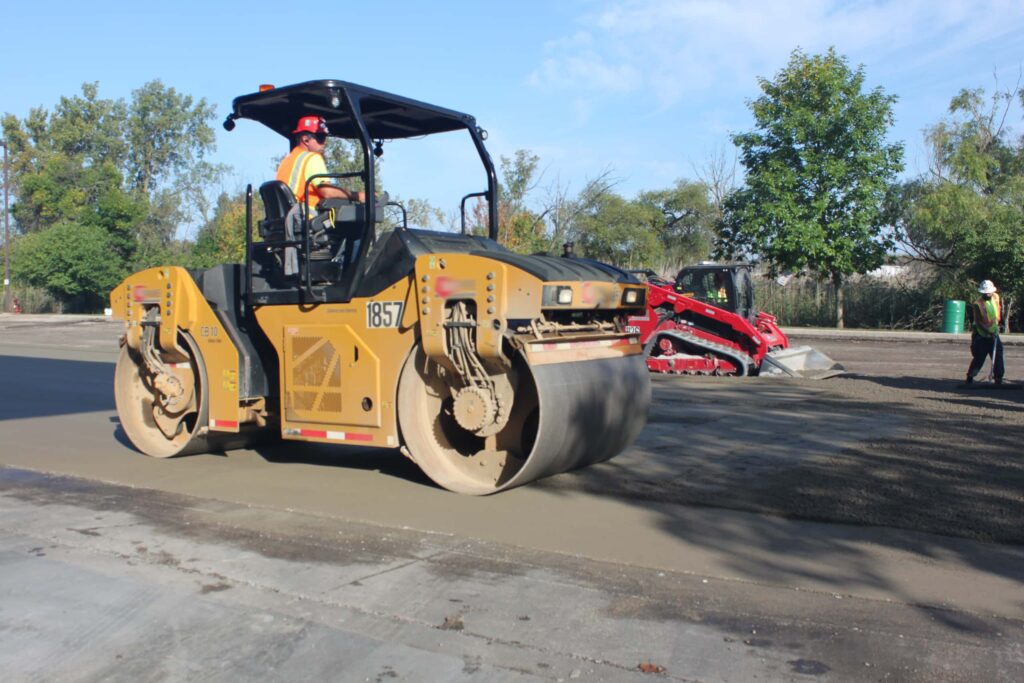 Why Use Roller Compacted Concrete?

Stakeholders and developers are increasingly aware of the benefits of RCC placed with high-density asphalt pavers, though many are still in the dark as to how well RCC performs in comparison to standard concrete.

Roller-compacted concrete projects are completed faster than standard concrete projects because they require zero forms or dowels to set in place. The roller compacts and forms the RCC, which speeds up the curing process. In many cases, roads can be reopened in a matter of hours rather than days.

RCC is the Economical Choice

Compared to traditional blacktop, RCC limits the need for patching and frequent resurfacing, which reduces long-term labor costs. Fewer work zones over the lifespan of the pavement further reduce the cost of labor.

RCC is the Safer Choice

Lighter-colored RCC surfaces are easier to see at night than blacktop, and retain surface integrity better by comparison. Reduced repairs and resurfacing during the life of RCC pavement also increases safety by reducing the number of work zone setups.

RCC is the Sustainable Choice

Less maintenance translates into greater energy savings and reduced material use over the pavement’s lifecycle. With the right mix of aggregates, the amount of cement required for RCC projects can also be reduced, making the environmental impact of RCC even better. 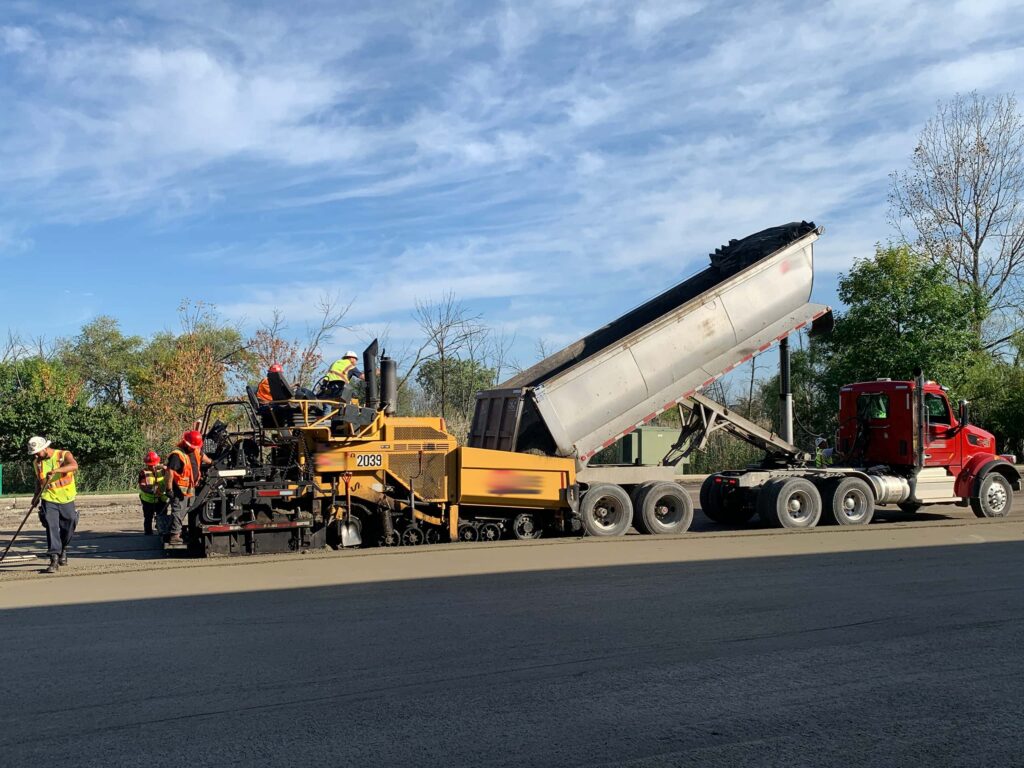 From streets and local roads, to high-volume intersections and parking lots, the application of Roller-compacted concrete extends far and wide. But it also provides a number of commercial benefits and advantages:

Why Choose Rose Paving For RCC?

Roller-compacted concrete improves the integrity, longevity and aesthetic of any paved surface, but only if it’s done correctly. With more than 40+ years of experience as the premium paving contractor in North America, Rose Paving can ensure that your RCC needs are completed properly.

Contact our dedicated sales team today to schedule a consultation.